Here are a few pics of my Moro beast in progress. It's actually all together; I'm waiting for the black acrylic primer to dry before I start painting. (and I'm also going to do a touch of research since I'm going to paint the fur similar to an African Wild Dog.) 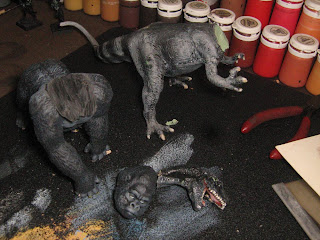 I started by taking the heads off two vinyl toys using a razor saw. The allosaur's head was easy enough to lop off, but the gorilla head took a little more time since it was set in between two high shoulders which I wanted to preserve.

Next, I drilled holes in the allosaur head and gorilla body and dry-pinned (with a large brass rod) the two parts to get the position I wanted.  I glued the head to the body (with the pin) and started to fill in the large gap with green stuff. Another layer of green stuff was sculpted into fur. I impressed divots into the fur where the spines would be placed. I decided on spines but left off a feathered head crest; I think there's already enough going on at the front of the model. 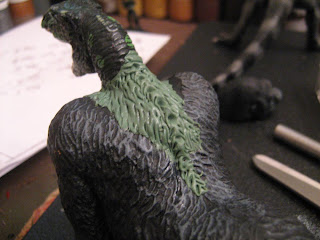 The spines were individually made by rolling small pieces of green stuff into "snakes" with pointy ends. Later, when the green stuff had cured, I could snip each spine down to the length I needed it, and glue them into the divots with a little super glue.

I tried a lion-type tail (with brass rod and a greens tuff tuft at the end), but it just wasn't doing it for me. I think a slightly larger tail would fit fine and balance the model well, but adding tails simply made the beast look too conventional; I'm looking for slightly more freakish. 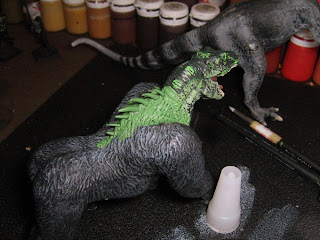 The spines I like. They turned out better than I thought, and were easy to make. The whole model is a little front-heavy (in looks), but I like it because subconsciously, the look feels a touch unsettling (to me, anyways.)

Paint comes tomorrow. And I should be able to finish him this weekend - of not tomorrow. I'm happy with this quick, off-the-cuff conversion. I have a few more old, second-hand dinosaur toys sitting around in a footlocker that I think just became a larger bits box.