RSBM Battle Report: A buzz around the arena

It was like any other day in Karthij; the sun was high, the sands were hot and the wind was useless. But the streets were empty. The noon crowds had heard the sound of a small engine in the area of the arena, and the sound of any kind of engine in the Wasteland is worth checking out. 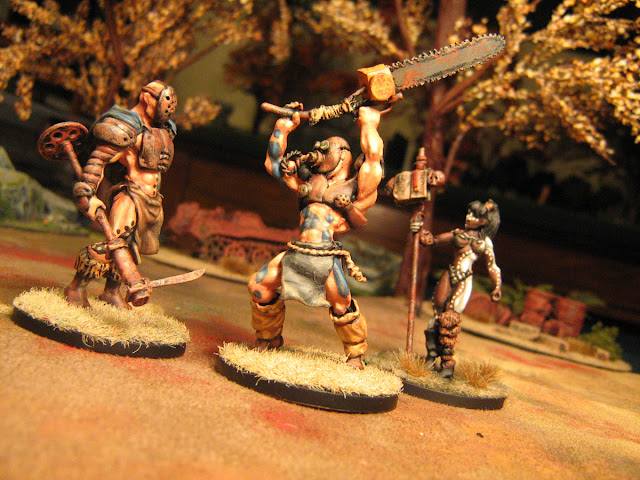 It was a simple match, the kind between two warriors who only wish to see who's best. Ruk wielded his halberd, converted from an old Qwik driver shaft. But all eyes were on Husq and his restored ancient chainsaw, a relic of times when the land was more trees than sand. By the time the first spectators arrived, the two combatants were already fighting. 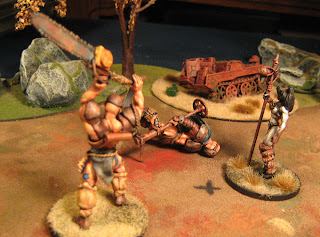 Ruk had to throw all of his focus into defending against the rusty teeth of the chainsaw. He used a lot of energy, but he managed to keep the mean machine at bay. The match picked up when Husq swung the saw around and bashed Ruk in the face with the engine casing, knocking him down. Immediately Husq was upon his opponent with the chainsaw, and at the very moment the menacing ripper came down on Ruk, it stopped -- out of gas!

Husq dropped the saw, drew his cutter while Ruk got back up, swinging his halberd gently with glee. Ruk had used most of his strength in defending against the chainsaw, but Husq, without his machine, was not much stronger than Ruk. Still, Husq would not give in, and again they came together. 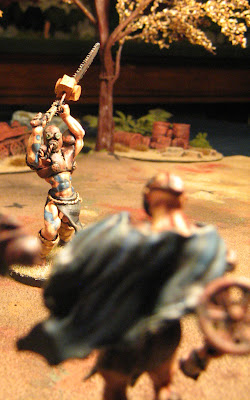 The fighters grappled, neither able to gain the advantage. Ruk was able to step back, catch his breath and think about his strategy. He went in again with renewed strength. Husq came out to meet him -- and in an amazing bit of luck caught the inside of Ruk's arm, slicing open a vein! Ruk left puddles of blood everywhere he stepped. Now Husq was smiling; time was on his side, and Ruk knew it.

Ruk came charging into the center of the arena and with his heavy blade, caught Husq in the chest! It was a serious wound, gaping and bleeding. Husq had strength enough for maybe a couple more attacks. Again, the two warriors clashed, this time Husq's blade slicing open Ruk's right thigh as Ruk's halberd sliced only air.

Both fighters stepped back to appraise the situation. Husq acted as if to come in for another attack. But Ruk noticed the amount of blood spilling out of Husq's chest wound, and to the disappointment of the crowd, he simply stepped back to witness the inevitable. Husq swayed in the hot wind still tinged with the long forgotten smell of exhaust. Then he simply collapsed and died in that small pond of blood and gasoline.