Here's my converted gladiator (above) representing an unnamed class represented by this terracotta figure (right) from the Fitzwilliam Museum in Cambridge (UK). The conversion was simple: I swapped arms with a hoplomachus figure, and converted this figure's original helmet (he started off as a secutor.) 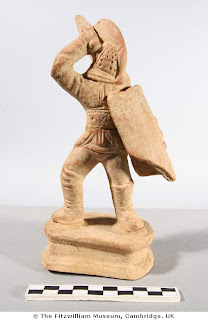 The conversion of the helmet was simple; I filed the front of the helmet flat, while preserving the center crest (as per the original statuette.) I redrilled the eye holes, and added greenstuff around the base of the helmet to give it a more conical shape. The crest on mine is much smaller than the terracotta figure it's based on; I admit to not consulting the original sourcework as much as I should have. I still like my representation, though.
I also rushed the painting a bit; This figure had been sitting on the table too long and I wanted to get it finished and onto the shelf with his brothers. that leaves one final gladiator to paint.
Again, this figure represents a class of gladiator that falls somewhere between murmillo and secutor, the only difference being the helmet. I've named mine a demisecutor, half-secutor, since, at this point in the class's transition, he is more secutor than murmillo in my opinion. I will pair him against retaririi, thraex and hoplomachii.
Email ThisBlogThis!Share to TwitterShare to FacebookShare to Pinterest