54mm Waiteri tribe: Starting work on the Shaman (and his "puppet" show) 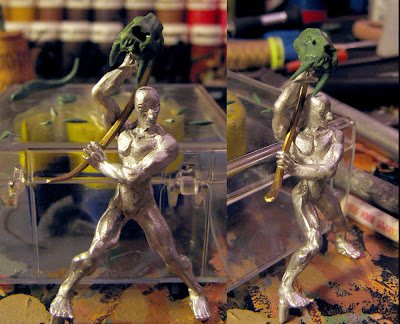 I sort of worried myself into doing the shaman first. I was trying to figure out where I would get an animal head for him to carry (for his magic "puppet" show.) Then I realized, he might have a skull rather than a head. This helped because I've sculpted small, ambiguous animal skulls before. So I chose the smilodon (saber tooth tiger.)

I looked up a few images of saber tooth skulls and got crackin'! I wasn't looking to make an exact, anatomical skull; I just wanted to make it "look like" a saber tooth's skull. I guess I'm just lazy (I actually have a degree in medical and scientific illustration-- Hey, I can draw or paint you an excellent smilodon, I just can't sculpt it very well.) In any case, it wasn't about the animal the shaman was carrying, but how he was using it in his animalistic rites.

When I was happy with the skull, I set it aside and began on those large incisors. I made these from one piece. I rolled a piece of green stuff into what I call a pointed cigar. I curved in the ends and worked them into sharp points. Then I used my clay pusher tool to flatten the teeth a bit. I set it aside to cure. I made the teeth from one piece because this helped to keep the teeth close to the same size. To get my teeth, I simply cut the piece in half when the green stuff had cured.

Attached to this skull will be some fur/skins to complete the effect of the shaman's "puppet" cat. The skin would be in the general shape of the smilodon, so I sculpted rough paws to be added to the "puppet" as well. I think I will leave the claws out and have them as a necklace worn by the shaman. Again, this is me being lazy. I do have the points to make claws; it's just a matter if fiddling with them and getting superglue all over my fingers. Ugh. Dangit, ok, I'll add the claws.

You'll notice a piece of brass rod in the shaman's hand: I've flattened and shaped this a bit (on the anvil), and it will be painted up to look like a large animal's (mammoth?) rib that the shaman is using to help support his puppet. I only added this so that the shaman looked like he was actually doing something with his other hand.

Quick note: I think the anvil is one of my favorite tools these days. I use it for swords, spears, blades, ribs (a first for me), and bending and shaping brass rod for other projects. If you're on the fence about buying one, keep in mind, they're not too expensive (especially for folks who regularly drop big bills on small soldiers, anyway). The anvil I own can be found over at Micro Mark for $20.
Email ThisBlogThis!Share to TwitterShare to FacebookShare to Pinterest