Gettin' ready for some prehistory!

I've put in my order and payment for my first order at Bronze Age Miniatures, and I'm totally psyched! David is a good communicator and makes the process easy. He also told me he's working on some stuff that will fit my project better, so I'm looking forward to see what he sculpts.
Remember that list of exceptional sellers I posted earlier? David and his Bronze Age Miniatures can be added.

There's a pretty good chance I'll put in another order in the future; I've been really thinking about these. I've even started writing a little history of my tribe: They are the Waiteri tribe of the Moonblood people. That is NOT a werewolf reference in case you were wondering. I'm going to borrow from real-life tribes to create the back story for my tribe.

Yanamamo myth says the Moon ate the souls of children, so an angry hunter (a god?) shot the Moon with an arrow, and the Moon bled all over the Earth. From the blood puddles were born mortal men. From the larger puddles were born men so fierce (Waiteri is the Yanamamo word for "fierce") that they killed themselves off. Men from smaller puddles were still somewhat waiteri, but survived. Yanamamo say of their tribal members that the fiercer ones have more of the moon's blood in them. Hence, the Waiteri tribe. 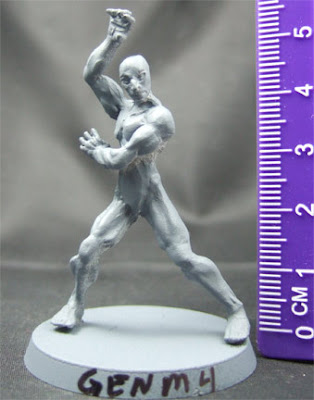 I had another realization: My tribe will need a shaman. This is the figure (above, copied from Bronze Age's website) I will convert to that purpose. His upraised hand will be holding the head of an animal (I hope to find a decent minotaur/bull head) with a full skin flowing over the shaman's arms. His back hand may be holding a stick (I haven't decided for sure) to help prop up his bull "puppet." I have it visualized in my head; I'll try to get a drawing out in the future.
Oh, it may be a bull, or perhaps a big cat (Yanamamo fear Jaguar.) It really depends on what animal head I can acquire or sculpt. I'll leave the shaman bald, and may even have him go "commando."

Thanks, Clovis, for giving me some direction. Sorry, again, it's not Sci-fi. Maybe I'll slip in something during this new project.
I'm sure David at Bronze Age thank$ you, too ;)
Email ThisBlogThis!Share to TwitterShare to FacebookShare to Pinterest