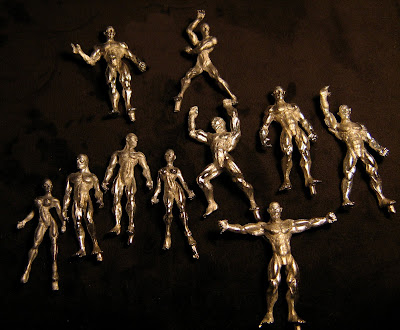 Instead, there are pegs on one foot of each figure. The pegs look like they'll fit into a hole on a common Games Workshop monster base. I think I have one or two bases laying about; I'll give it a try. Otherwise, I will clip the pegs and pin the figures to poker chips (a little of 40mm.) As I mentioned earlier, the chips are heavier, cheap and easy to find. 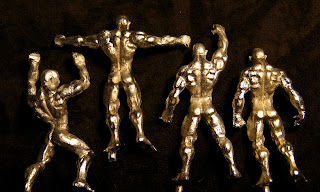 Another thing I like looking at these figures is the muscle detail. It's as if David at Bronze Age Miniatures, looked at a Burne Hogarth book ("Dynamic Anatomy") and transformed the art into sculpture. Lots and lots of muscles on these figures, all the way around. This poses a small dilemma: I want to add furs and skins, but I don't want to cover up too much of the sculpts. A few of these figures may just have loin cloths. 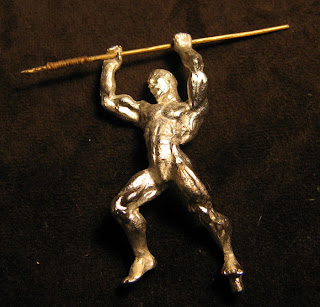 I originally wanted one figure to be swinging a two-handed flint axe, but the pose also looks great with a spear, as if he's preparing to deliver the death thrust. To remedy my indecision on which weapon to give him, I think I may just order a second copy of the figure later (as well as a few seconds of others. I can see multiple uses for most of these.)

There are a lot of little things about these figures that also make them great, but too many to put here. But a quick example of a small detail that adds to a figure: One figure stands with his hands at his side, but he's not actually standing: One foot (just the heel) is ever so slightly lifted off the ground. It's hard to describe- it's such a subtle action, but it can speak volumes. A lot of figures these days have such extreme, dramatic, comic book-inspired poses (just as some of these do- nothing wrong with that), but this figure, standing steadfast with his one heel barely lifted demonstrates a more profound action. This figure will be my chief, standing proud over his tribe, and, with that one lifted foot, preparing to take his first step on a long journey ahead of his tribe on the search for mammoth, aurochs, a new home, enemies and other adventures.

Yes, these figures are excellent. The babes have nice racks, too.
Email ThisBlogThis!Share to TwitterShare to FacebookShare to Pinterest