I've finally finished my gladiator project! (for the time being.) Here is a thraex I made by converting a hoplomachus figure (in fact, the very first ((fighting)) figure I painted when I began doing these 54mm gladiators.) The weapon arm I used was the one swapped from the previous figure I posted. The original shield was ground down and a new shield (more appropriate to the thraex class)was added.

So that's 18 total fighters and one Charon. 12 of those figures were converted from five different models. What? Yeah, here, I took a few photos to show the different fighter classes I was able to achieve from the same models. Now, I couldn't have made most of these conversions without some greenstuff and especially without a few extra parts I requested from Harold at Blackcat Miniatures (Thanks, Harold!) 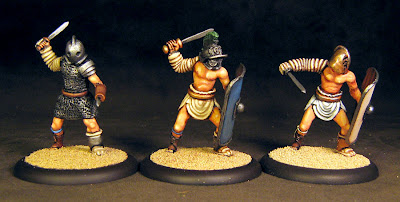 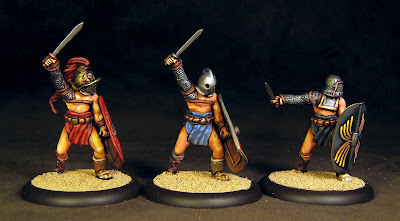 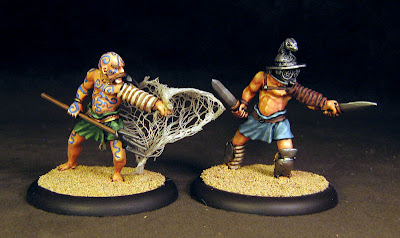 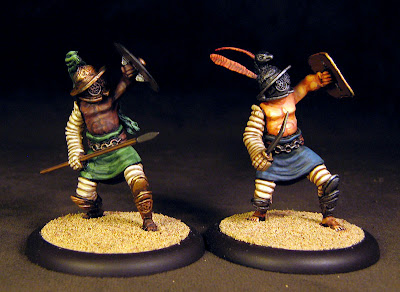 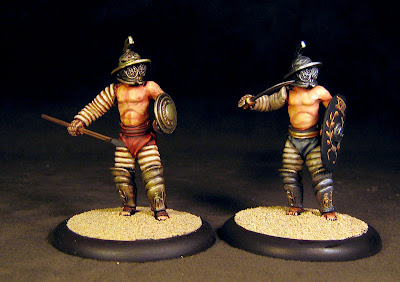 So, I remember a few months back saying that what I really wanted to paint were some large-scale gladiators, and now I've done it. And I am content. For the next few weeks, I'll paint up some odds and ends (Rackham Confrontation's Kyran the Hunter, and a couple Reaper figures) in the next few weeks. I'm not 100 percent on whether to make a fantasy/prehistoric/barbaric tribe from Bronze Age Miniatures' generic line, but I'm certainly close to saying yes. It would be a summer project, but with all that greenstuff pushing, and outdoors playing, this project would certainly take a while. I've pinned down 10 or 11 figures I'd like to purchase. I've even pasted and printed pics of those figures and sketched out some ideas of how I'd like them to look (see below). I also show three different ideas I have for one specific sculpt. If this next project goes well, I might start making my own figures from Bronze Age's generic line. Still, I'm not quite ready -- at least mentally -- to do it, but I think I at least have the skill to do it. 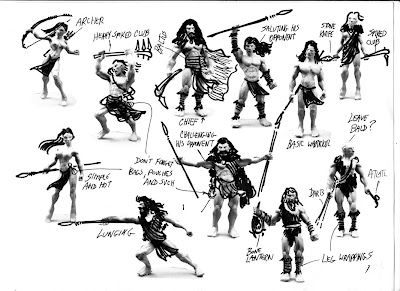 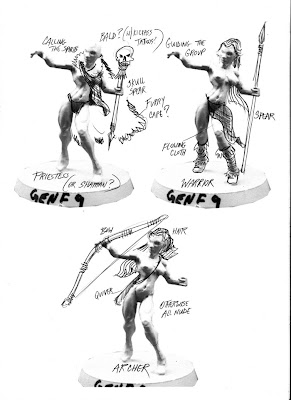