Holy smokes, I think I can do it! I'm happy with my first effort here, anyway. I used a 54mm captive germanic warrior from the Alpha line (sold at Black Cat) as my base figure. My original idea was simply to throw some fur anklets and loin cloths on him. Add some hair and make him a prehistoric captive to be sacrificed by a shaman. 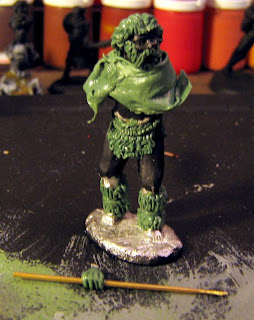 WELL, I had some green stuff leftover, and I remember making hides for my Sculpey huts. So I flattened the green stuff and tore the edges, and decided it wasn't a bad looking buck skin poncho my captive could be wearing. I threw it one, and it immediately looked like it was blowing in the wind. It also covered his bound hands. Suddenly, I saw a hunter trying to stay bundled against the Fall winds. Well, I might as well have him holding a spear.

At this point, I'm not sure exactly how his arms will be positioned beneath the poncho (I won't actually sculpt the arms, but I want them to be in an implied position.) I may sculpt his other hand on the spear (holding it two-handed, though, not necessarily at the ready.)

Anyway, I'll have to get back to this figure later; I have to head to work. But that will give the green stuff time to cure, and me time to figure out the next step. I'm pretty psyched. And if Bronze Age Miniatures happens to be reading this, they should be happy, too. I'm about a week away from dropping about $150 to start my tribe.

Note: Hey, and that's the first hand I've ever sculpted! (Don't look on the other side though, there's no thumb- that side will be hidden anyway.) And, yes, I do have to fix his hair a bit- I think it's too far cured at this point. Oh well. I still like the figure.
Email ThisBlogThis!Share to TwitterShare to FacebookShare to Pinterest