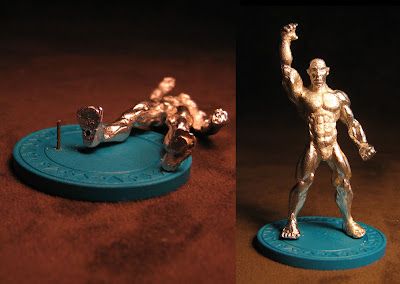 I dug out my bases and compared them with the new tribe; Many of the bases worked just fine (40mm seemed to be the best,) but I decided to stick with my original idea of using poker chips. They actually measure close to 40mm. I also like their thickness; that extra material provides just a little more grip on the pin.

A friend of mine mentioned that my minis just keep getting bigger and bigger, "pretty soon, you're going to be playing with dolls, Carmen."

Yep, they are getting bigger. I think 54mm is the max-out though; I want stuff to be able to fit in Chessex cases (which I can get easily by painting for store credit at my FLGS.) Anyway, here's a quick review photo of some of the figures, genres and scales I've done. So if you were looking to get into a different scale, here's kind of what they look like next to one another.

* The gladiators stand between 45-50mm. The base is a little higher than the poker chip which makes this gladiator look as tall as my new tribesmen.
Email ThisBlogThis!Share to TwitterShare to FacebookShare to Pinterest