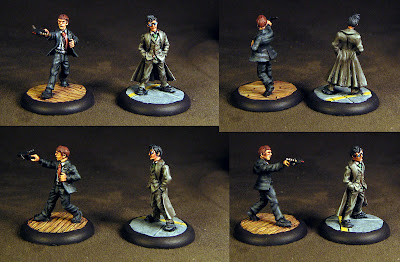 There wasn't much conversion work needed. I made a PKE meter for figure to the left, and a pair of glasses for the figure on the right (He had bigger hair, so that figure is more or less my Egon Spengler figure.)

Last week, I was looking through Artizan's Thrilling Tales range, thinking about painting up a group of Cthulhu Mythos investigators. Then I remembered I had my Ghostbusters tucked away. Well, heck, why couldn't they also investigate the rumblings of the Elder Ones, too? A couple purchases later, and I have a couple weeks of work going on my table.

I'm still thinking about getting an Ecto-1. The Hallmark ornament version seemed the best candidate, though, I'd still like to see the size of it compared to the figures before I commit. I've also thought about just getting some random 1/43 scale ambulance or hearse or luxury car and making my own Ecto vehicle (Ecto-3). It's not like my figures are exact representations of the characters from the movies, so why should the vehicle have to be? Making my own would be fun in its own right, anyway.

As for using these figures; I've settled on a modified version of Tusk (mammoth and dinosaur hunting rules). I've also modified Tusk's movement rules so that these figures can be used on a floorplan, a Kill Dr. Lucky board, for example. I could also use dungeon tiles, Tannhauser boards or FFG's upcoming Mansions of Madness. But first, paint.
Email ThisBlogThis!Share to TwitterShare to FacebookShare to Pinterest