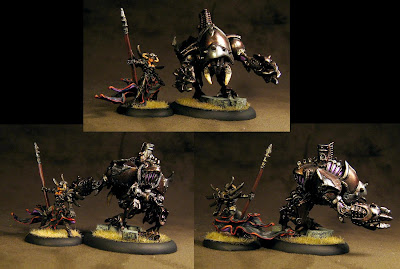 Here's the rest of Rob's Warmachine figures. The warcaster (Warwitch Denegrah), just like the witches coven, was fiddly, but not impossible. The Helljack and bonejacks were downright fun and easy! (Well, except the construction.)
For the metal, I used a base of Games Workshop's Tin Bitz mixed with a little black and highlighted with (conservatively) increasing amounts of gold. A touch of Boltgun silver was used as a final highlight here and there. 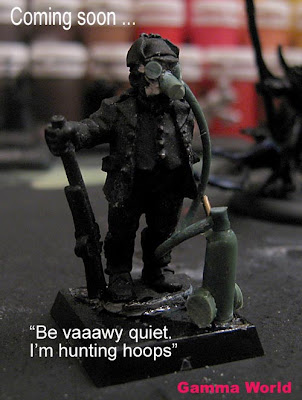 Next up: I have a couple more of Jeff's figures to do; I will do them at the same time as I start my Gamma World figures- WOO! Gamma WOrld! As I have mentioned earlier, I bought some of TSR's original sculpts. I have also converted a couple of my own figures out of the lead mountain including the one pictured. This week, I paint for myself!
Email ThisBlogThis!Share to TwitterShare to FacebookShare to Pinterest