Long evenings on eBay can turn up nothing, but a quick trip to Kmart turns up a 1956 Ford Thunderbird 1:43 scale diecast metal kit. Sure, it's a sports car, and the scale is indeed slightly larger than the figures' scale, but I can deal with it.

This vehicle is (of course) NOT a full-sized Ecto vehicle -- only a two-seater -- So instead of giving it a number (Ecto-2), I've named it Ecto-Pt, for Ecto-Patrol, a simple auxiliary, first-responder vehicle that arrives at the scene to analyze the situation before the main vehicle arrives. 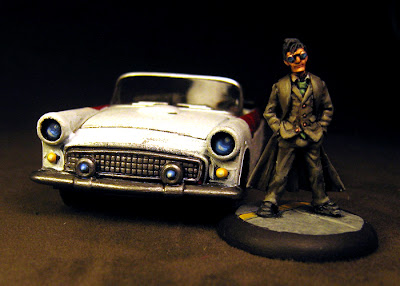 The kit (Testor's Easy Builder) was simple to put together, though the holes in the wheels were not big enough for the axles to fit. I gave the body a coat of primer, a couple layers of paint and a little bit of weathering. I repainted the seats (which came with that Philippines factory paint job). And that was about it. Now the conversion work can begin!

I'll build a package of random equipment to sit over the trunk. It will include electronics, canisters, cables and a few ghost traps. I have no plans for proton packs to be added- that's just too much extra work I don't want to get into with the painting I have yet to do. I'll also see about adding some lights (painted, not real) on a roll bar just behind the passenger compartment. So that's the plan. We'll see how it turns out.

And yes, it took a little bit of rearranging, but the new vehicle fits in the Chessex case.
Email ThisBlogThis!Share to TwitterShare to FacebookShare to Pinterest