Ghostbusters: Gettin' some wheels, but not Ecto-1

I looked up the Hallmark Ecto-1 ornament; It's just about impossible to find one cheaper than $30. If I could see one in my hand next to one of my figures, and it looked good, I'd purchase one. But I don't want to spend that much on something that just might be too small or too large.

Modelers and wargamers debate whether 1:43 scale is too large or just right. By scale, they are too large, but I have a few of Matchbox's Models of Yesteryear, and I think they "look" good. So I went tromping through eBay to see what I could see. First off, my goal was not to necessarily find a car that could be Ecto-2; I just wanted to find some modern wheels for either my Ghostbusters OR my paranormal investigators. Second, I need the car to be relatively cheap so that my purchase won't break me if I buy a lemon. Really, for now, my only use for the car will be to mark the starting area for the ghostbusters/investigators on the map or terrain. It also just helps me to complete the "set." When I do some of these sets of figures, I want to make sure everything is there that  would be needed to play a full game: Figures, accessories, vehicles, smaller pieces of themed terrain -- see this image of my 28mm cavemen for an example of what I mean by "set." The Ghostbuster's set won't be as extensive, but it includes everything I need to play a game (based on the Tusk rules.) 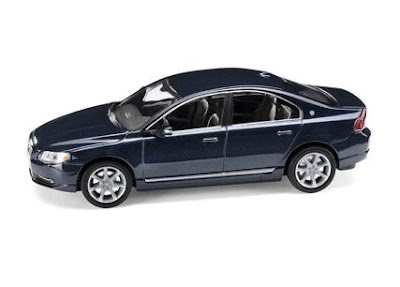 I'm not going to do too much to it. I might hit it with some matte varnish to kill the gloss and "age" the car a bit. Drybrush some mud spatter along the bottom half (you gotta drive through a lot of dark woods as a paranormal investigator.) Maybe I'll add a little bit of rust behind the rear wheel (just like my old Volvo.)
If I get really energetic, maybe I'll tear it up and rebuild it as a smaller "Ecto" vehicle with not as much ghostbusting equipment strapped to it, maybe just a modified cargo carrier on the roof.
I also looked for a station wagon of any sort, but again, nothing was cheap enough for my tastes.
Email ThisBlogThis!Share to TwitterShare to FacebookShare to Pinterest