Machinas: Tormenta and Vae (plus sale) 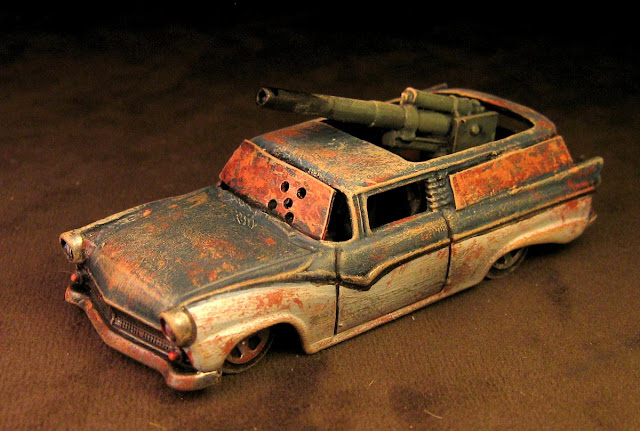 Here are the last two from my current batch of cars. The first car I think might be my new favorite. It's a 8 Crate from Hoot Wheels. I cannibalized most of the interior, including the moon roof, so that I could fit this German 88 inside. But it's not just the gun I like; The two-toned color scheme plus the orangish rust of the armor plates just seems to work for me.

The low-ride profile also fits the concept of a large gun mounted in the back. But since Hot Wheels are awesome, this beast actually still rolls. 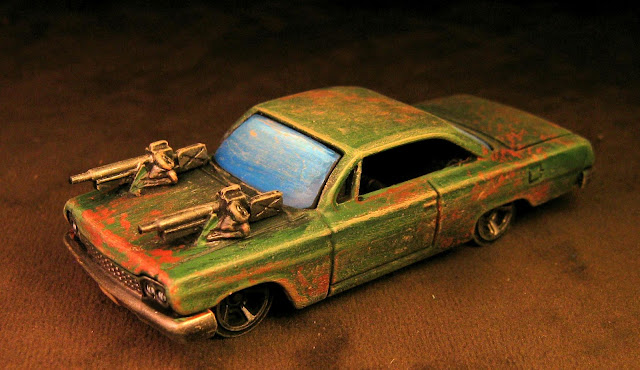 The second is a '62 Chevy fitted with a couple German guns from flames of war. This one was a straightforward conversion, though, no less post-apocalyptic.

I'm a little obsessive compulsive with these cars already; This 62 Chevy (the green car above) and the Plymouth Fury (the "police car" from my previous post) just don't fit in with the classic 50s Atomic Era feel of the rest of these cars. So I'm thinking of selling them. I just gotta figure out how to pack them.
If anyone is interested, I'm setting the price at $20 (which includes BOTH cars and shipping), payable by Paypal. If you're interested, send me an email at evilcartoonist at yahoo. I'll only sell the cars as a duo. First-come, first serve. 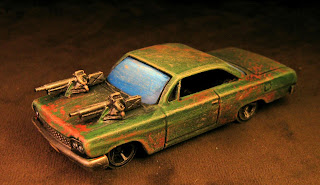 And if no one wants'em, I'm sure I can grow comfortable with them as time goes on. Or they can be target practice for the other cars :)
Email ThisBlogThis!Share to TwitterShare to FacebookShare to Pinterest