Post Apoc: Our great savior, The Oppenheimer, Bringer of Light 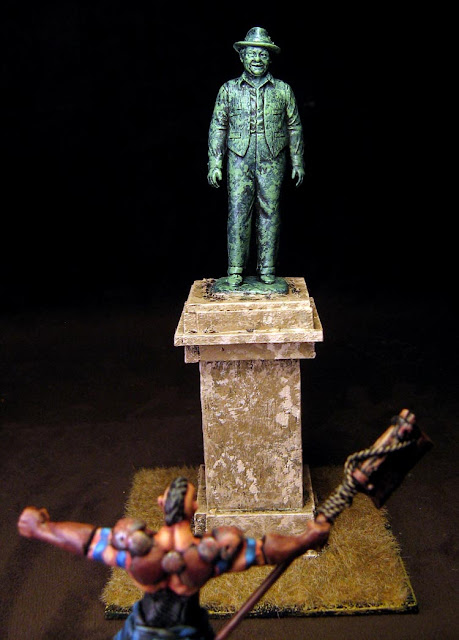 All hail Oppenheimer, bringer of light!

This was an easy model to paint. First of all, the pedestal was recycled (oh yeah, I was lazy today) from an older statue I had made for a terrain contest at our local FLSG (I won second place.)

I glued the 60mm Marx figure (from the Lassie set I think) to the pedestal, primed the whole construction- flock and all- then painted him up.

I painted the pedestal first with a base of tan. I then stippled lighter and lighter layers one upon the other.

I used the same technique on the bronze statue, except I started with Foundry Storm Blue as a base coat, then I mixed in more and more amounts of light green, layering the statue with more stippling.

The statue represents the main deity of my post-apoc world, "The Oppenheimer." Everyone (except the Waiteri tribes) in Septimontium worships The Oppenheimer as the bringer of light and creator of the world.
Email ThisBlogThis!Share to TwitterShare to FacebookShare to Pinterest