A couple notes on Post-Apoc terrain 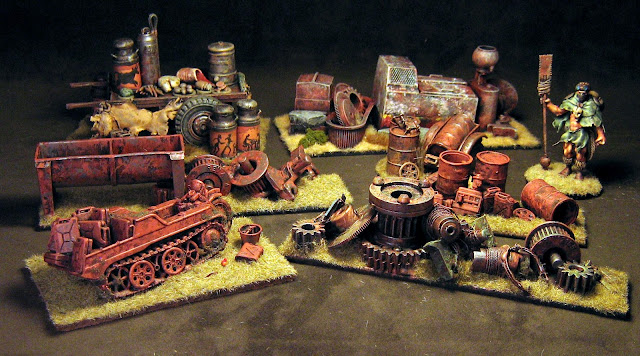 Nothing much new here; I just wanted to mention a couple things about my terrain.

I did a couple new pieces. One has a metal water trough (complete with epoxy resin-made "liquids"), and the other has an ice cream freezer as its centerpiece. (the freezer is actually a milk cooler from the Marx dairy set I recently purchased.)

Most of the junk has been painted with rust. I overdid the rust on purpose; by painting everything one basic color, it helps the terrain to blend into the background so players can focus on the action. There's the obvious exception of my street vendor, but even that piece has some rust added.

I'll use the terrain to form barriers for post-apoc matches as well as with games of Qwik.

And though the terrain might add to some of the games (rules-wise), I want the focus to remain on the game (Red Sand Brown Sky) with the terrain as eye candy. Which leads me to my last note: I think I will expand just a little (miniatures-wise) on my post-apoc world of Septimontium, but the focus will always be on the gladiator fighting. So I'm not going to make any buildings; I'm happy with the amount of terrain I have; But I wouldn't mind adding another fighter or two (or three or four), and I also wouldn't mind painting up a couple more bystanders (civilians other than the priests.) But you won't see me expand as much as my Street Corner project, for example.

I'm happy with what I have. There is enough terrain to make a nice little area for fighting (My next AAR will take place on Meat Street, using all the terrain shown here as well as my Oppenheimer statue and a couple trees - see the setup at the end of this post.)

I will also continue to write up details about my world. Even if they don't directly relate to the matches, I enjoy having a lot of subtext to my games to help with narration. It will also help me to actually take up a campaign, which I admittedly haven't done with any THW rules set yet. 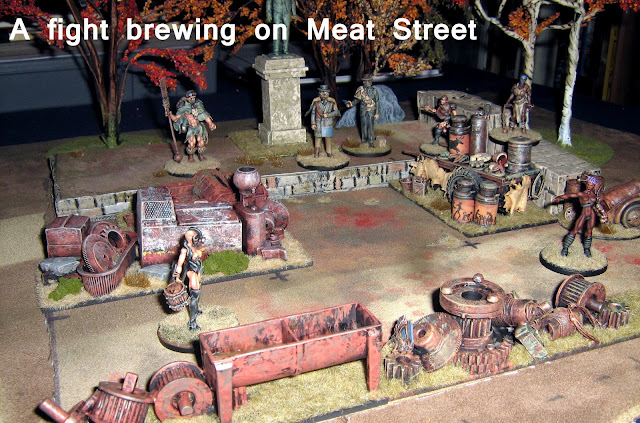