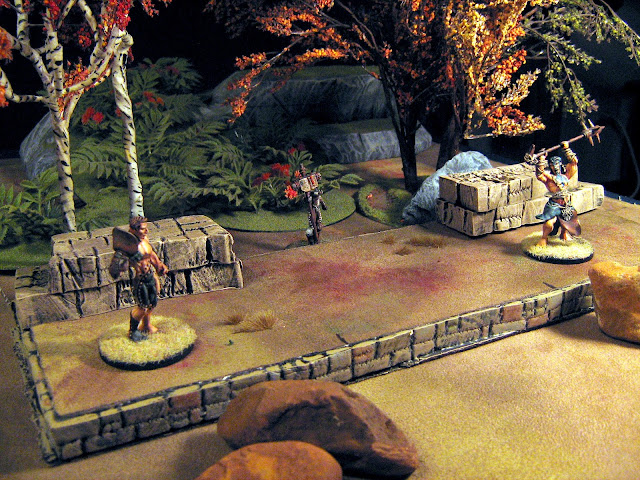 Though, the Waiteri tribes protest the new technology of the Septimontiums, they do not shun them. In fact, Sept citizens are permitted to join the Waiteri tribes (and sometimes a Waiteri will leave the tribes to join the Septs). To join a tribe, an applicant must reject the new technologies but must also pass a simple combat test; life in the Wasteland is difficult, so new members must show they have a strength. 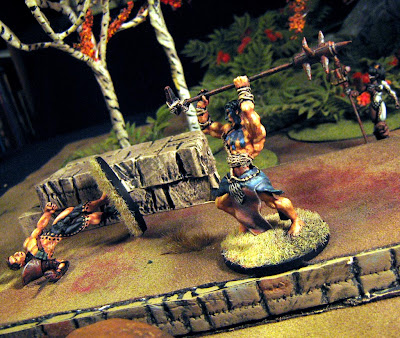 Hodon saw the folly of Sept life and challenged the Waiteri for membership. He would fight Adams, a knife fighter of Waiteri Smith (tribes are identified with surnames and individual members with given names, all in the old language.) The test is simply called "The Bridge," and the goal is for the applicant to force a Waiteri warrior of the end of a rocky platform. Real weapons are used, and the fight is serious business, so injuries are common.

Adams opened the fight with an immediate move to the center of the platform to gain ground. Hodon timed the swing of his heavy mace perfectly as he moved to meet Adams, striking Adams' leg with a fierce stroke! Adams' leg went numb and he fell on his back grasping his leg which gushed blood from a gaping wound. His leg would not last long, but neither Adams nor Hodon could quit. One or the other must be forced off the platform to finish the rite. 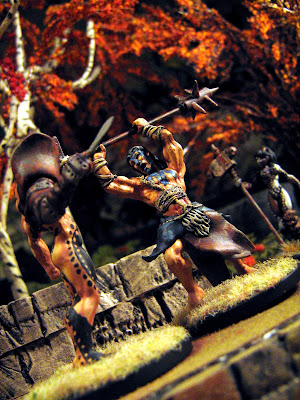 Adams was able to rise before Hodon could press the attack. Hodon just needed one more good swing to force Adams off the platform and end the match, but Adams would make Hodon earn his membership into the tribe. Adams parried away a few of Hodon's swings, but was not able to force the melee back to the center of the platform. Adams' leg quickly became useless as the bleeding worsened.

Adams showed no pain but he knew the end was near. Hodon easily out-maneuvered a slower Adams and attacked hard. The large spikes of Hodon's mace slipped under Adams' arm guard and into his belly pulling the Waiteri warrior painfully off the platform and to the ground. Adams tried to lift his head, but he was too weak. Hodon passed the test, but Adams' wound was mortal.

Just before he died, Adams realized he had been defeated, but in defeat, he knew the tribe had gained a new member. There was honor in his death because a stronger warrior would take Adams' place and help ensure the tribe's survival.

As is tradition with the tribes, new members would be given a proper Waiteri name. There was no longer Hodon of Rubikon; that name died when Adams fell. Now, there was only Harold of Waiteri Smith.
Email ThisBlogThis!Share to TwitterShare to FacebookShare to Pinterest