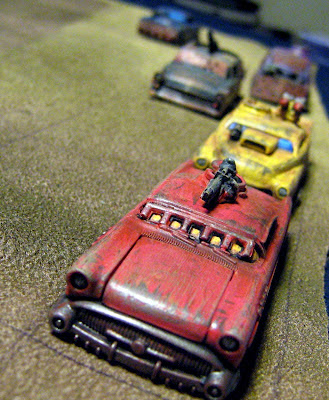 The drivers stood on their hoods, next to open doors, or sat on hatch rims of their machines. All raised their right hand, called the “high hand” since it is on the high side of the track at the Circus Acceleratus. They recited the oath in unison.

“I will endure to be hurled, to be rolled and to be flipped by wheeled metal. And to be shot, and to be burned and to be exploded by missile. Blessed is Saint Machinas.”

This was the only ceremony that would precede the race; the significance of the race was a ceremony by itself.

The Festival of Saint Machinas would see two weeks of racing, beginning with this race, the first in a score of 1- and 3-lap heats to determine the lineup of the (7-lap) Machinas Major, the final race to determine this festival’s champion. 100,000 people, nomads and mutants filled the stadium for a heat race, and all 100,000 would come back to enthrall themselves with every race that followed, all the way to the Major.

The engines sputtered, popped and exploded into growls, and the crowd roared in excitement to the thunder on the track.

It took just seconds for the track auxiliaries to confirm the engines were all running and to clear the track. After the last mechanic was off the track, The Recumbent of Easy Chair -- the high priest of the Church of Oak Street – dropped his fist signaling the drivers, and the infernals were off!

(Note: The vehicles are long-titled for the canonized names of their makers, but I used the colors of the cars in this narrative for the sake of brevity. Also, since a race narrative is tedious and repetitive, I just covered the highlights.)

After some initial jostling, Red took the lead followed by Yellow, White, Purple and Blue.
Going down the straightaway, there was a little bit of exchanged weapons fire, but the status quo was maintined. 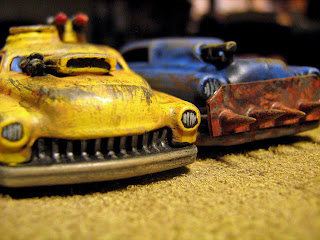 Entering the far turn, Purple took a high lane to pass White and, having the better tires, easily gained position. But the real action took place at the rear of the pack as Blue and Yellow fought for the scraps, neck-and-neck, grinding metal, exchanging fire. But neither could gain the advantage and shared last position.

Coming out of the turn, Purple pulled close to Red at the head of the pack and opened fire with his twin machine guns, hoping to knock Red out of contention, but Red’s turret gun got a lucky hit direct on Purple’s gun systems! Purple dropped back and White gained second position. Having not been part of the action in front or behind, White had been able to save momentum, and he set up to pass Red for first position. 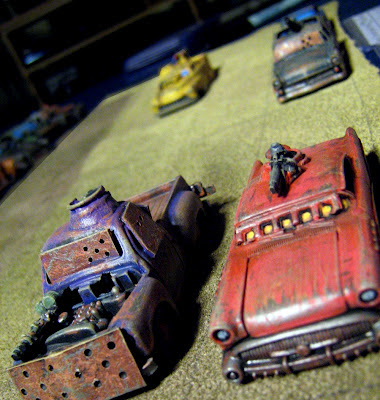 The vehicles were not reliable as was evident when Red, easily holding onto first, suddenly had his brakes lock up! He fell back and White gained first with no effort. Purple was also in position and passed Red.

Entering the near turn, Yellow saw Red falling back and moved in to take advantage.  Having a heavier machine, Yellow easily bumped Red back yet another position. Unfortunately for Blue, this final loss of position for Red blocked Blue’s last chance of gaining any position.

Yellow tried pushing his luck against Purple. He was able to pull up next to Purple, and they ended up side-by-side tearing down to the finish line.

The final running order coming across the finish line was White, with Purple and Yellow side-by-side, Red and then Blue. Since the first three finishers moved on, it didn’t matter if Yellow or Purple finished ahead of the other. Red started off strong, but having that one turn of bad luck with his brakes cascaded into more problems. 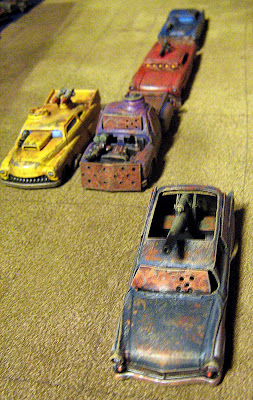 With the fights for the lead and the last spots wearing down those cars, White, who had been in the middle of the pack, was able to take advantage of weakening opponents to slip into the win.

With all the bashing and shooting going on, it was somewhat surprising that all the cars finished the race. Though, it was only a 1-lap sprint.

It was just the first heat race, a simple warm-up, but the crowds had waited four years and cheered as if a champion had already been crowned. And there were two weeks of races yet to be run.

Game mechanics notes: For those who play Charioteer, one of the major changes (really, just about the only change) I made for this version was to allow vehicles to share a spot (though, not a slot.) It made for some exciting and tight racing, but there are still a few contingencies I need to write down and find solutions for.
Email ThisBlogThis!Share to TwitterShare to FacebookShare to Pinterest