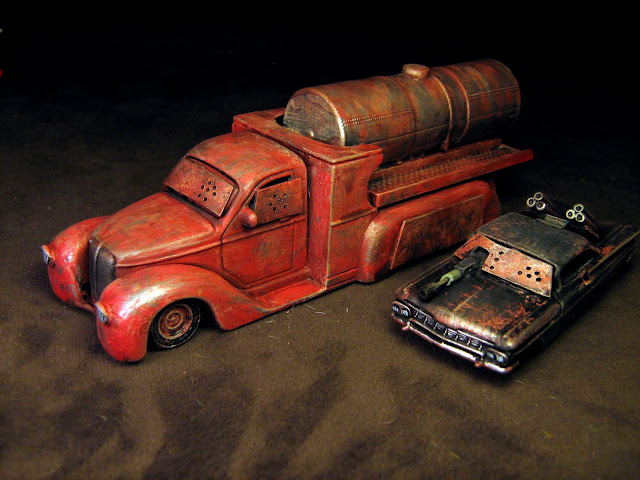 Here are my big trucks, one finished, one in progress. The finished truck carries the Nectar of Saint Mobil. It's not meant to race in the Machinas races, but if I'm going to do post-apoc cars, I'm going to do a tanker. The second truck is my battlewagon, inspired by the big rig fortress from Death Race 2000 (the Jason Statham version.) The turrets are Battlefront pieces, with barrels strengthened using brass rod. Some green stuff sandbags and razor wire complete the truck.

Using my modified Charioteer rules, each of these trucks fill either two spaces tightly (front to back), or in four spaces loosely (2x2) on my road. I'll still need to write some rules to accommodate all the new contingencies that will arise with larger vehicles like these, before I start using them in games.

And yes, I ordered a couple more cars, the Karmann Ghia I mentioned in an earlier post, as well as a drag race-modified Willys coupe. The plan is to mount twin Maxims in the windshield of my Karmann and a multiple rocket tubes on my coupe (though, I'm low on tubing, so that plan might change.)
Email ThisBlogThis!Share to TwitterShare to FacebookShare to Pinterest