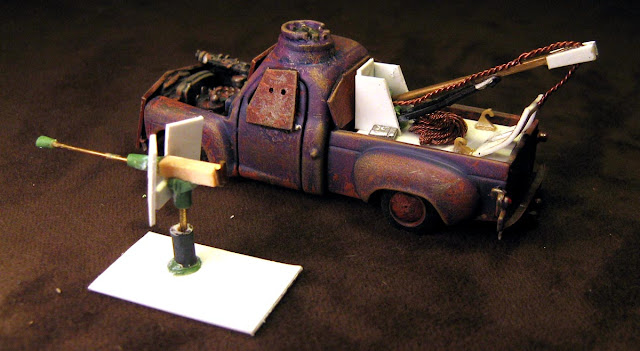 This evening, I made a couple drop-in options for my pick-up truck (with the towing rig shown as it would be set up.)

These came out better than I thought. I started the towing rig by first adding the front wall/supports, followed with the tow beam (a bipod for something long forgotten, plus a piece of brass rod.) The rubber sling at the end of the cable was made by cutting out the shape from plasticard, then using a lighter to heat the plastic up just enough so that it would sag into a natural slack position. Then I added a few bits and bobs and called it done (except for painting.) 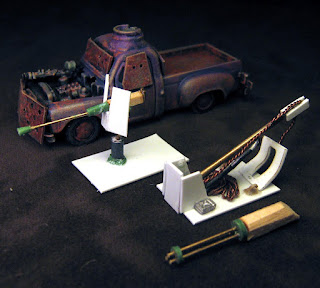 The mounted machine gun took just as long even though it had fewer parts. The gun shield was easy enough; I just cut out the shape, scored a couple shallow lines with an Exacto knife, and carefully bent the shield into the shape I needed.

The difficult part was trying to drill out the barrel support and flash suppressor straight enough to look right without tearing the walls of the green stuff. It took me a couple tries with each part. Even with this barrel support, I tore a part of the green stuff, but I've hidden it at the bottom of the barrel. The receiver is just a piece of bass wood with a couple short pieces of brass rod for the grips. I still need to add an ammo box.

The vulcan/gatling gun isn't a load for this pick-up. It's actually meant to be a center-mounted main weapon for my Evil Twin machine which is on its way. The weapon is a little large, so I'm hoping it works. Though, I've had some practice making a gatling gun in the past, this one was much more difficult being 4 or 5 times as small. If it turns out being too large for any of my new cars, then I have a bad-ass weapon sitting in my bits box.

Maybe I could give a new post-apoc gladiator a gatling-gun arm.
Email ThisBlogThis!Share to TwitterShare to FacebookShare to Pinterest