Machinas: Wreck of the Fleetline

The Fleetline car just wasn't doing it for me, so I sacrificed it as a wreck (don't worry; it cost me all of a dollar.) I don't think Brother Pilot survived this time. 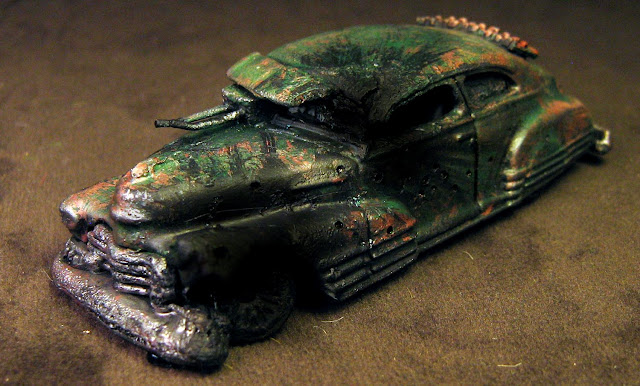 I started with a hammer, but nothing gave - those Hot Wheels are built damn tough. Even under the hammer, barely any of my original paint was chipping ( a good sign; I can save on varnish.) I switched to a pair of pliers which I had better success with.

I drilled out some bullet holes, painted the vehicle and finished by actually burning/melting the front wheel and bumper, allowing the soot to help blacken the body where it was hit with large caliber "thunder" weapons. I'll probably have to hit the coot with a little varnish; it will wipe off if not otherwise protected/fixed. I used a brush and black paint to fan out some blast marks (you can see then on the driver-side door and roof.)
Email ThisBlogThis!Share to TwitterShare to FacebookShare to Pinterest