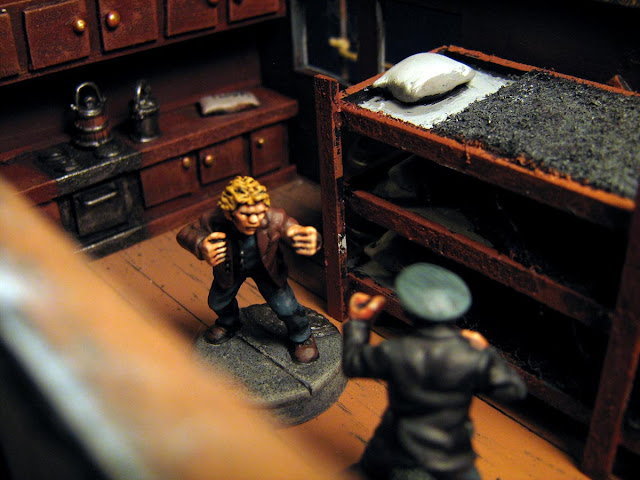 AB Johnson was hot. The fights on deck were over, and he was trying to collect his winnings from the stoker J. Green, but Green insisted there had been no bet. 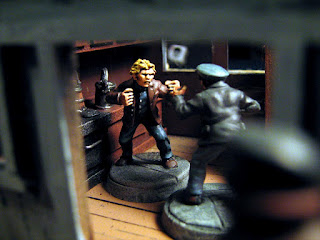 “I ain’t shake on no bet, Johnson! I shook on account that I agreed wichyou that Block were the better man!”

Johnson pointed with a fist -- “See, everybody! He confessed! He said he shook on it!”

The other crewmen didn’t care much except that they wanted to get some shuteye. But they knew Johnson was a hothead, so they cleared a space in the quarters. Whether J. Green shook on a bet or not, Johnson was gonna throw hands. He was already pulling his cuffs back and pushin’ the boys outta the way. Green saw Johnson’s intentions and obliged.

“We’ll see about that!” And the two sailors let fly. 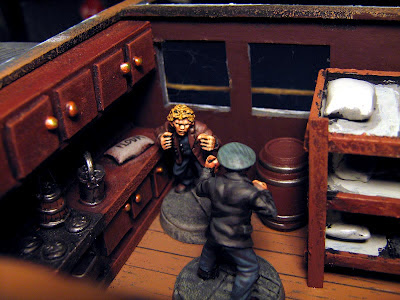 Green made the first move and socked Johnson in the gut, backing him up against the mess. Johnson tried to fight back but was trapped against the stove. He was used to throwing haymakers, but the cramped quarters sapped their power, and his jabs were no use against the quick Green.

Green threw another flurry of punches, working Johnson’s head, making a mess of his face and forcing him to retreat further into a corner. With no space to work with, Johnson had a difficult time defending himself and had to cover up and wait for an opening. Green, on the other hand, was having a difficult time finishing off Johnson, despite using every punch in his repertoire. 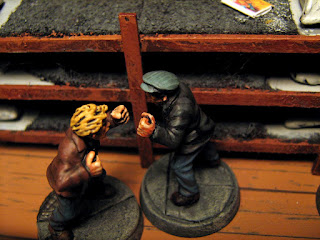 Sensing that Green was starting to tire, Johnson came out with fists flying, and managed to fight his way back to the relatively open space near the bunks. Green was in trouble; he had used all his energy early in the fight but wasn’t able to put Johnson down. But Johnson had been saving his energy, not wanting to waste it in cramped quarters. Now he let loose with his first haymaker- and it connected!

Green went down in front of his crewmates. He tried to stand up right away, but his legs were rubber. He sat there for a few moments unable to stand, dazed and smiling up at his opponent. Green was finished.

Johnson posted himself at Green’s feet and reminded him of the bet. 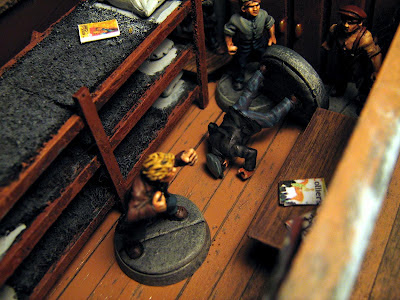 “I done beat you fair and square, now hand over everything you got.”

“Fair enough,” said Green as he reached into his pocket and pulled out a nickel. He flicked it at Johnson.

“There ya go, ‘n that’s all yer gettin’ ‘cause that’s all I have. But don’t worry, you can head on down to the Lady’s Powder Store on Fifth and Market, and spend that nickel on a new face. Your mother might like it better 'n the one I done gave you.”

“My mother likes me just the way I am.”

“I reckon’ you’re right. Hell, just last night, your mother told me abouts how she likes your nice face, whiles we was engaged in pillow talk.”

The crew gasped and readied themselves to prevent a murder.
Johnson hesitated, snickered, guffawed and then let out a hardy American laugh.
He helped Green off the floor.

“Well, let’s go you sonofabitch. I’ll buy you a beer at the No. 9. I ain’t got much money, but look -- I won a nickel!”
Email ThisBlogThis!Share to TwitterShare to FacebookShare to Pinterest