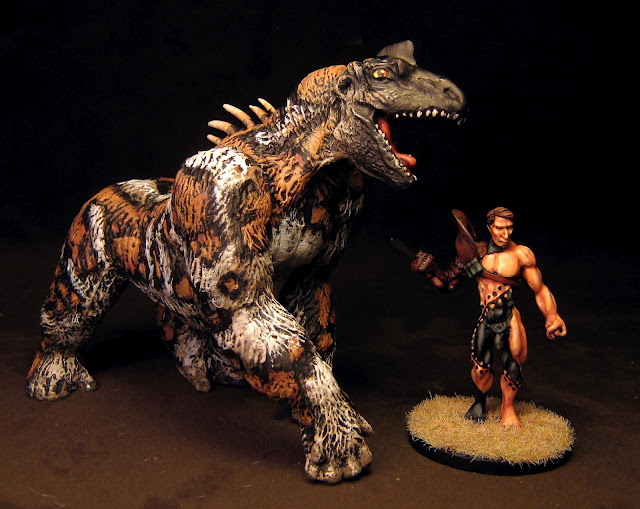 I call it a Moro after Dr. Moreau. I chose that name since this animal is a combination of a couple others from my toy box. From concept to execution in less than 48 hours. And I like it. I think this beast turned out nice.

The green stuff work went smoothly. The paint job tied it all together. And I like the spines for that little something extra (thank you to everybody who made suggestions, by the way!) 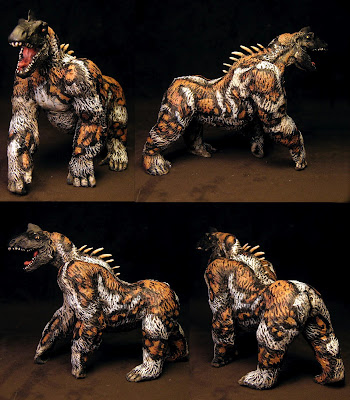 Painting was actually quite easy (it was inspired by the random patterns on African wild dogs). I drybrushed the whole beast a light tan color. The I went around and painted large and little swaths of black. Inside my black patches, I painted a base coat of light brown in large patches and smaller spots, then I went a much lighter brown and drybrushed that to highlight the light brown patches ... and then one more highlight of the light brown.

Next, I went a step lighter from the light tan overall base coat and picked out/highlighted the light tan areas that weren't covered up with the spots. One more layer of almost-white over those areas finished off the fur. Next, I painted the spines, teeth, mouth and eyes. Done and done.

I put together this beast because I wanted another animal in the arena for playing Red Sand Brown Sky. I also wanted to see how viable taking apart and reassembling vinyl animal toys was. Answer: My box of old dusty vinyl dinosaurs just became a huge bits box.
Email ThisBlogThis!Share to TwitterShare to FacebookShare to Pinterest