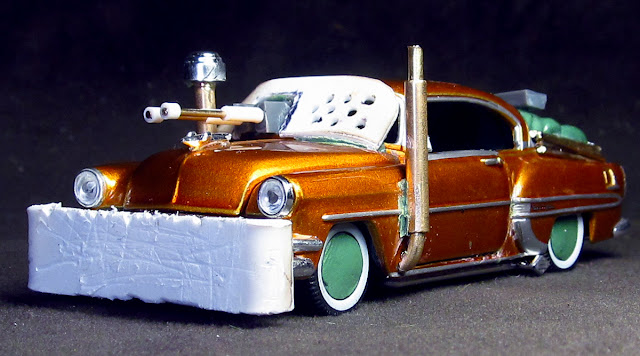 After finishing the last of my cars, I was already feeling a little withdrawal, so I picked up this '54 Chevy Bel Air. It's another M2 Machine (from the Auto-thentics line.) 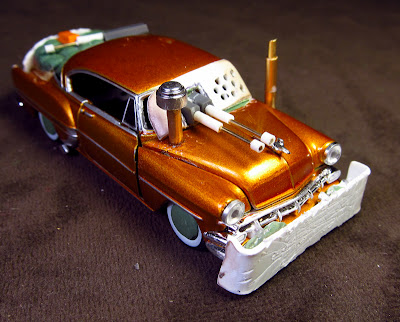 Instead of converting this car to be used with one of the factions, I decided this would be my "personal" car -- the car I would drive as a player during games of Machinas. So I decided to outfit it as I would a real car in the Wasteland (with a few liberties.)

I had to make a little bit of background to explain a couple things, and I'll share that when the car is finished (though, Colonel Jack is a character in Mark Twain's "Roughing It," one of the books found by the Church at 7602 Oak Street -- for those who follow the Machinas background.) But I will explain how I built a couple things.

The stovepipe exhaust is a thick piece of brass rod slipped into some brass tubing which was bent to fit into a hole I drilled out of the car body. The snorkel on the right was made using the same brass tubing capped off with the air filter canister that I took out of the engine compartment.

The push bar and metal slab are plasticard. For the wraparound bends of the push bar, I used a lighter to warm up the plastic and bend it into shape.

The guns use the same construction I've used for all my other .50s -- brass rod, plastic tubing and cut pieces of plastic sprue. 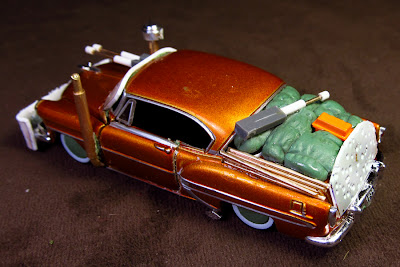 Part of the baggage includes a spare .50 machine gun, and some survey sticks (part of the varied background of this car.)

I had some green stuff left over, so I added armored covers to all the wheels.

I'm still not sure what color to paint Col. Jack's Special. I'm trying to decided between black for the "cool" factor, and a desert yellow for the "practical" factor. Or maybe desert yellow with black flame job? Or all-rust like my Runnin' Gunners for a more "realistic" look. I'll figure something out.