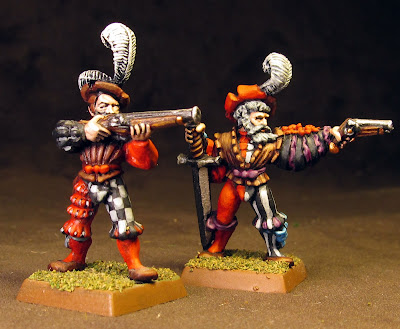 So I went shopping for a new battery for my old camera, and no one- and I mean NO one - sells it (ok, I found the battery on Amazon, but I don't want to wait.) So I figured it was time to get a new camera, anyway.

Luckily, I found a Canon Powershot SX150is on clearance at Target for $80 (retail $199.)
It's still a handheld, one-click kind of camera, but this one has the ability to manually set F-Stop and Aperature values, which I couldn't do with my older Powershots.

It also came with a much larger memory card. My old camera would only hold about 20 photos that were around 4000 pixels wide. (I don't take many vacation shots, so I never bought a new card for my old camera.) The new one seems to hold around 4,000 photos at 4,000 pixels!! (Is that right?!) I guess a few years makes a big difference in the context of technology.

The photo here of my old, old Warhammer Empire gunners was taken straight out of the box- not bad. Not bad at all. 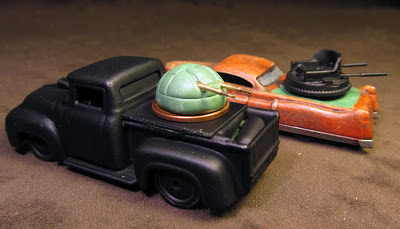 Ok, on to old news. Since I'm deep into Machinas, I've also been working on a few cars. There are the Firelane and the Belvedere, but there are also a couple of my older cars that I've decided to retrofit (to better reflect at least one of the new signatures: Tail guns.) The pickup originally had a poor-looking set of rocket pods. I added the glass turret because I want to add this truck to my Slade's Silvers faction (the one with the Driving Fortress.) And I've added a lower profile gun turret to my 53 Cadillac. The older more traditional mounted .50 that was originally on the car looked fine, but I was always afraid of breaking it off by accident. I DID save the .50 though- I have a couple ideas for it for later. And yes, both of these turrets traverse. 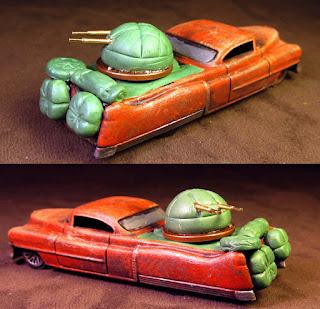 On second thought, I prefer the turret on the Cadillac. The turret is not as oversized as it looks in the photo. Also, it is able to traverse a full 360 degrees (just clearing the cab).

Looks like the Caddy is going to Slade's gang (hence the extra baggage on the back), and the pickup is going on the Machinas circuit.

All of the turrets on my cars are interchangeable, so if I change my mind here again, it's just a matter of swapping out turrets.
(all of my turrets have the same diameter of brass rod drilled into the bottom. The rod plugs into a hole I've drilled through solid greenstuff ((for stability)) that's been pressed into the vehicle- you can see the bed of gs in the photo.)
Email ThisBlogThis!Share to TwitterShare to FacebookShare to Pinterest