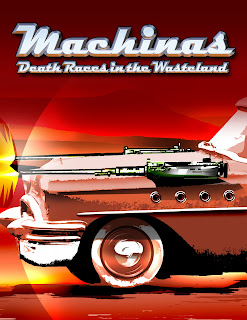 That’s right, death racing fans, Machinas is soon to be a published ruleset.
I’ve been working with Ed Teixeira over at Two Hour Wargames on “Machinas: Death Races in the Wasteland.” We don’t have a release date yet, but we’ve been working on the rules the past few months, with editing and tweaks the past couple weeks.

The plan is to offer Machinas initially through Kickstarter, after which “Machinas” will be sold through Two Hour Wargames. If there’s enough funding, there are even plans to offer cast weapons you can use to customize your 1/64 diecast vehicles! (And if you’re a big backer, you’ll probably end up with one or two of my original Machinas cars.)

So what is Machinas?

Machinas is a death racing game that takes place in a post-apocalyptic world, inspired by, among others, “Road Warrior,” “Death Race,” “A Canticle for Lebowitz,” and “Ben Hur.” Ben Hur? Yes, in fact, I created Machinas as a modified version of “Charioteer,” the chariot-racing game, also by Two Hour Wargames.

What separates “Machinas” from similar games?

One of my favorite parts of “Charioteer,” from which “Machinas” is derived, is its innovative pack-racing mechanic. In most racing games, the board is either a complete track or a long road, meaning you need wither a large table to accommodate a track, or you need a stack of road sections placed one after another as the race progresses. The problem with stretching out your gameboard in this manner is that you also stretch out the race; strong leaders pull away from the pack and weaker drivers lag way behind, essentially pulling players out of the action. In Machinas, all the competitors race in a pack that stays together as the race progresses. Instead of physically moving all the cars around a large track, a marker keeps track of where on a lap the pack is currently located.This keeps the action tight and intense from start to finish.

Keeping the cars in a pack also keeps the playing surface small. Since you only need a space that is five-cars wide and long enough for as many cars as you want to race, the game can fit on a small table. With the small footprint, “Machinas” can be played with cars as small as 6mm to as large as 1/24 scale. Though, 1/64 diecast is what the rules are designed for (mostly because those cars are cheap, widely available and just the right size, but there is no scale conversion necessary if you want to go big!)

But “Machinas” isn’t just a racing game. Half the challenge is staying alive to finish the race, and there are customizations available to help you survive and win; the game features close to 70 signatures to modify your car with, including an array of weapons, defensive options and car upgrades (bigger engines, roll cages, extra armor etc.) There are also more than 20 signatures to customize your drivers; your car isn’t just a car, there is a personality behind the wheel.

Some of the driver signatures, such as Faint of Heart, are detrimental (and offer a challenge) to the player: A Big Block engine on a car protected with a Big Slab and armed with Twin .50s with Tracer Ammo isn’t worth squat if your driver loses his cool anytime his car gets bumped.


Players can race on city tracks or ancient wasteland highways. There is also a campaign system where you can play either a driver or Crew Chief, whose career careens through the Wasteland and, Oppenheimer willing, all the way to the Circus Acceleratus during the Festival of Saint Machinas!