I liked the idea offered up of doing both black and tan, but I wasn't sure how to go about merging the two colors. I looked through images of hot rods seeing if there was a scheme that I could copy, and I found one where the two colors were separated by a diagonal line just off the halfway mark on the car. But I still wanted something a little different. It was just a matter of a few doodles before I hit upon my little "Dusty Trail" scheme. 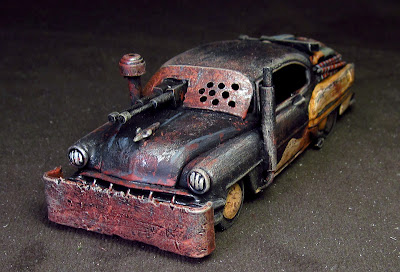 I wanted something "cool" (the black with chrome), but I also wanted something practical, such as a camouflaging color (some tan/desert yellow.) I took a little inspiration from motion camouflage seen on WWII warships, where a wave was painted on the bow to make the ship look like it was moving. Instead of a wave, I painted the dust getting kicked up.

I really enjoyed putting this car and background together. Since I have plenty of factions, I think any future cars I get will be purchased, converted and painted individually, so I can focus and put more thought and effort into their creation.

Col. Jack's Special is owned by a man who named himself after Col. Jack, a character from Mark Twain's "Roughing It," (one of the famous ancient books discovered by the Seven Hills Church.) In the book (as far as I can remember), Col. Jack, a man off the frontier, took a bus (horse-drawn) through New York City. The ride fascinated him, so he paid the driver $20 to drive him and his friend Col. John all over the city. Jack told anyone who got on the bus that he had paid their fare and that they should sit back and enjoy the ride. Jack was entertained by the variety of people he met on the ride, which continued for the rest of the day. 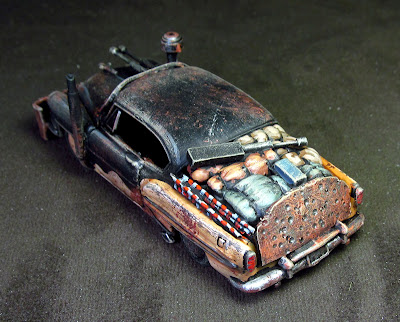 My Col. Jack's Special has a variety of uses. Mostly, Col. Jack serves as a low-cost charter for Wastelanders. The only drawback to hiring Col. Jack is that he is only one man with one car, so finding him is difficult. But when you do manage to hire his services, you're treated to a fine ride, indeed.

When he's not transporting folks across the wastes, Col. Jack loads his car with supplies and explores the fringes of the Known Wasteland. He carries as much survey equipment as he can (note the red/white survey rods seen on the left side of the baggage). Since he is one of the few people willing to travel far and wide to map the wastes, the Church gives him a larger fuel allotment than is usually given out.

For better fuel economy, ruggedness and torque, Col. Jack runs a diesel engine, hence the stovepipe on the left of the car. He has also discovered, on a couple of his runs, a wide but shallow river, which, for a long time, prevented him from exploring a section of the western wastes, so the car's engine compartment was sealed and a snorkel was added. 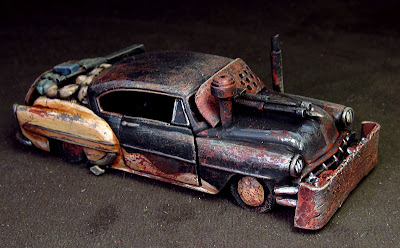 Most people in the Known Wasteland like Col. Jack, but there are still those marauders who will take a shot at him now and again, so he keeps a large slab of armor to protect his rear, and a push bar to clear barricades and other road obstructions. He also has extra armor on the wheels and the windscreen (though, I left the armor off the side windows to help preserve some of the car's original lines.) And, of course, Col. Jack mounts twin .50s, because he understands that even his gentle nature needs the support of a little extra firepower sometimes.

Col. Jack has never raced in a Church-sanctioned event (he is still called Col. Jack, after all, and not Brother Pilot.) But he is known to join in a random Waste Race now and again. He prefers more friendly races where there is more nudging and bumping than all-out shooting.

Racing Col. Jack in a game

If you want to run Col. Jack's Special in a race, here are his stats (copy these down later for when the rules are released. If you want, I can stat out more special characters in the future, though, I think you'll enjoy making your own.)