Machinas: Runnin' Gunners, and others wip 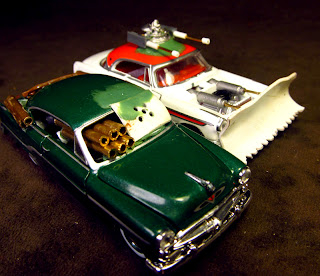 Here's my current progress. The cars languished on the table for a few days, but once I got some guns built and some rocket tubes cut, things just started coming together.

The car with the plow on the front will go to my Vestal Mechanics faction (the church faction.) The plow blade is just a piece of plastic heated up and roughly bent into shape- I wanted the rough shape instead of a nice straight plow. It's the one car with a "turret" mount that doesn't swivel.

The rocket car was pretty straightforward: I put a bunch of tubes all over it. You can see the six main rocket tubes in the front window. There are also two twin launchers on the back set at an angle. I think Slade's Silvers could use this car for its long-range abilities. 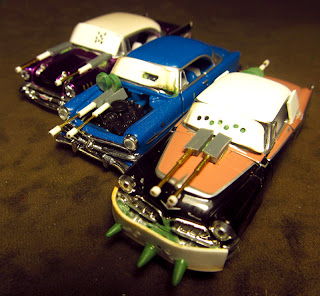 Then there are my three gun cars forming the core of my newest faction, The Runnin' Gunners, who have light armament but are faster movers for it, hence, the name. They'll join up with my other all-gun faction, The Big'uns (made up of three cars all armed with quad .50s.) I'm not sure what color scheme they'll have; I might just do them saturated in rust, with maybe a random fender or body part in a contrasting color.

One of the Big'uns is my last car still on the work bench. It's getting some major body work right now; green stuff is curing. I should have a photo of that beast in a day or two.