While Ed and I fiddle with the Machinas rules, I've been modding a few cars. Here are my two newest conversions. The first one started off as a '57 Chrysler 300c. It's not my favorite car, so I didn't want to put too much into it. But after giving it a simple but elegant gun up front a a nice little over-under deal in the back, the little gunship is kind of growing on me. I just might keep this one ("Keep this one?" Yes: Part of the Kickstarter for Machinas might involve me giving away a few cars to bigger backers. We'll talk later.) 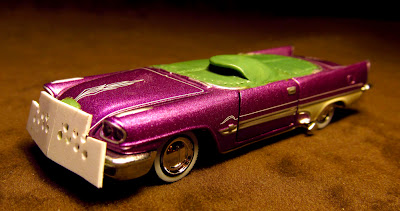 The second car is one I'm definitely keeping; it's a dedicated ram car. It started off as a '57 DeSoto Adventurer. I chopped the top, leveled it off and added a pilot's compartment (and a ram, of course.) I normally wouldn't chop the top off one of these cars (these are the more costly ones), but I have another Desoto Adventurer coming in the mail ... along with five other cars.

Both of these cars can be built in Machinas (and might actually do well in a race). Part of the fun of Machinas is creating your drivers and tricking out your cars. You will be limited in what you can build; You only have so many points to use to buy equipment for your cars and personality traits for your drivers. In addition, cars have maximum weight allowances. You can actually go over this maximum, but it will cost you speed. My ram car for example has a maximum weight allowance of 7 (weight is abstracted.) The Spiked Ram weighs 4. I'd also give my car the Heavy Armor Upgrade which weighs 4 as well. I've gone over my weight allowance, which you can do, but now my car will be slower since it is overbuilt.

This would be a sacrifice I'd be willing to make. The ram adds to my "Bashing" ability, and the armor upgrade takes away from both an opponent's Bashing (which makes my ram even stronger), and from his "Shooting" (to help protect me from my own Shooting weakness.)

So building your cars is easy, but you'll have to balance what you want to do with how much you can pay for and how much your car can carry. Not everything has weight- there are certain types of ammo for your guns, better quality tires - and driver traits don't weigh anything, of course.

With around 70 different choices for your car and driver, there should be plenty of options and combinations to keep you busy.

Or you could just put Quad .50s on your car and call it a day.