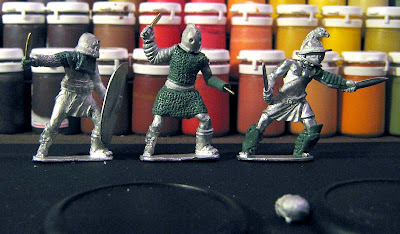 Just wanted to post a quick photo update of what I'm doing with my latest gladiators.
From left to right are a provocator (using a murmillo body), a scissor (using a secutor body), and a dimachaerus whose head I've replaced with a thraex helmet. On the dimachaerus, I've also added a high greave on the left leg, a small oval greave on the right leg, and a simple manica on his left arm.

I gave up trying to make a proper chopping blade for the scissor's left (gauntleted) arm. So I did a simple dagger blade (hard to see in the photo), essentially making this fellow a heavily armored dimachaerus. His chainmail coat was simple to do (and simple looking); It was just greenstuff with a bunch of holes poked into it.

Hopefully, wherever my greenstuff skills have failed me, I'll be able to cover up with some good painting.

I ordered some new bases late last week and don't expect them until Wednesday or Thursday. So I'll have to wait for them to show up before I can start painting most of anything (I like to paint with the base on). On Monday, I'll start priming everything (three gladiators, two boxers and two ACW Rebels.) I DO have bases for the ACW Rebs, one of whom will be put to the brush first.
Email ThisBlogThis!Share to TwitterShare to FacebookShare to Pinterest