This is my favorite, both the figure and the class of gladiator. I bought two copies of this figure; The pose is the most dynamic of the whole group, with his shield raised to deflect a sword blow, and his sica poised for a counter thrust. The second copy of this figure, I converted (easily) into a hoplomachus. It was a simple matter of cutting off the sica (curved sword) and drilling a hole to hold a new spear.
I made the feathers here from brass rod that was hammered flat then filed down to refine the edges. They are a bit oversized, but I wanted them to be a touch large to indicate this fighter's importance (as my favorite.)

The thraex is armored just like the hoplomachus -- two high greaves, quilted leg armor, quilt-armored weapon arm, helmet and small shield. He differs from the hoplomachus in a couple areas: The hoplon carries a small round shield (almost a buckler), whereas the thraex has a small square shield almost looking like a cut-down scutum.
Instead of a spear, the thaex carries a weapon not used by other gladiators: the sica. The sica is a small sword/dagger with a pronounced curve in the blade. As far as I've gathered, early sicas had more of rounded curve, and later versions (which I wanted to do here) had a distinct angled bend in the blade.

If anyone has been watching Spartacus: Sand and Blood, Spartacus fights his first few matches as a thraex.
A thraex would normally be matched up against a murmillo.

So that completes my three main pairings of gladiators. I still have a few fighters left to paint, but none of them have a dedicated opponent. Below are some of the major pairings one would probably see in the arena: 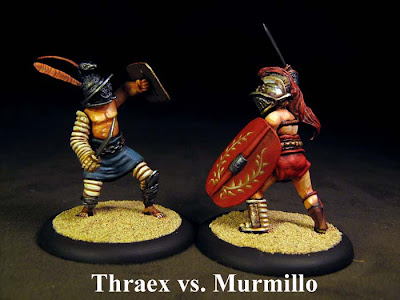 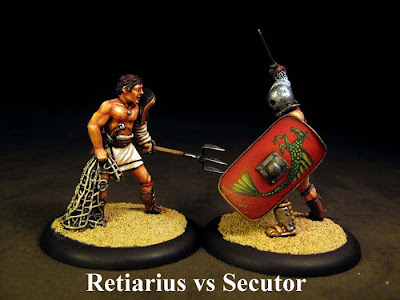 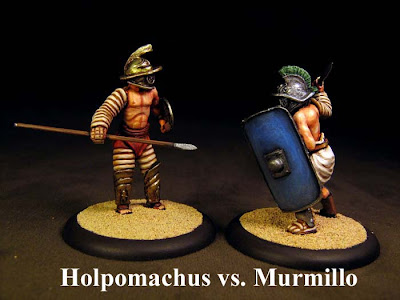