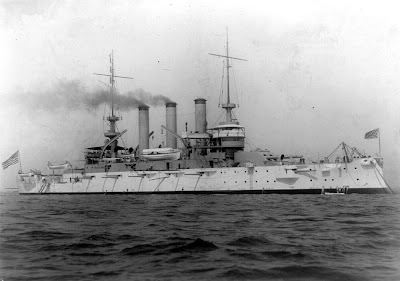 There have been a few questions here and there (this blog and other forums) about this ship. Here's what Dad has to say!

The scale is 1/24 and the plans are of the USS Missouri BB11 built in 1898. The ship is built as a stand off model as it appeared when it returned from sailing with the Great White Fleet. There is a third item I can use in building this model and that is trash bags. Two are in this ship. One forward and one aft and they are used to provide compressed air to fire the 12" guns. The guns will fire baby power to salute the 100 anniversary of Scouting. I thought it fitting to salute them with a 100 year old ship. I don't expect it to last more than 12 hours in water. So I've made no arrangements to bring it back home. I'll have to transport it to camp in four sections and three trips and that's why there is no side planking yet."

Thanks to Dad for filling us in!

By the way, the new photos show the battleship Missouri at sea in 1906, and with U.S. and Japanese officers on deck in 1908.
Email ThisBlogThis!Share to TwitterShare to FacebookShare to Pinterest