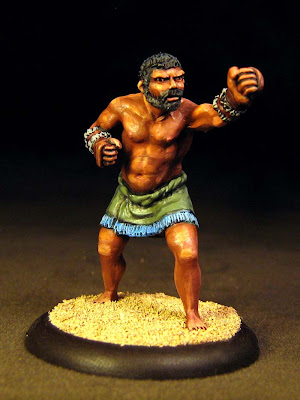 OK, so this isn't necessarily a gladiator, but he's still an ancient fighter, and he is also one of the figures that was sculpted for this line by Alpha Miniatures a few years ago. Thus, I've included him as officially part of my gladiator project (along with one other).

I painted this one up to be a boxer from one of the eastern provinces of Rome (Republic or Empire, I haven't decided.) The paint recipe for this flesh tone is very simple: Foundry Spearshaft 13A as a base, then add increasing amounts of Games Workshop's Dwarf flesh, and a final highlight of the Dwarf Flesh. I don't like to do a two-paint mix like that very often, because it's difficult to match the color up if you need to go back and correct any mistakes.

Though not classified as gladiators (as far as I know, and I know very little about this topic), ancient boxers were in no less danger: Their boxing gloves (caestus) consisted of a fur liner wrapped with leather straps in a complex pattern that ended at the fist which grasped either a hardened leather or bronze knuckleduster.

Oh yeah, and these guys wore no armor; death or maiming was a common result of those ancient boxing matches (which were not fought in rounds; a match continued until a result was reached). Junkelmann writes however that with the thick leather straps, the forearm could be used defensively. He even describes one of the ancient boxers' stance: One hand, held open, outstretched, while the other was held diagonally or vertically in front of the head that could serve as defense as well as be ready for a quick counterpunch.

On my boxer, I decided to be nice and gave him (and will be giving his opponent) the hardened leather version of the caestus. I don't have a varnish strong enough to take punches from bronze knuckledusters.
Email ThisBlogThis!Share to TwitterShare to FacebookShare to Pinterest